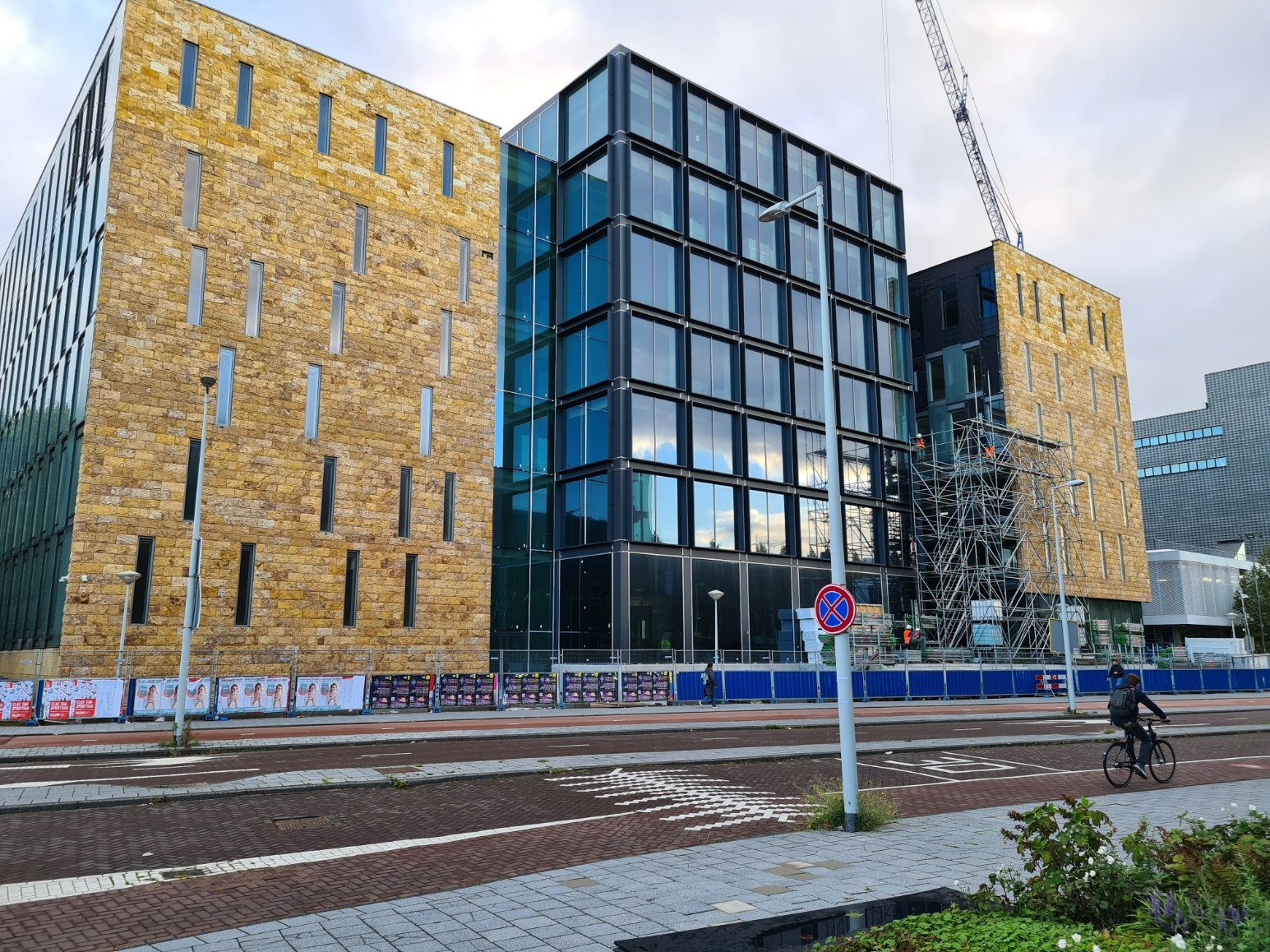 ‘The more complex, the better’

The final touches are being made to Amsterdam’s EDGE Stadium, an impressive project that is expanding Loyens & Loeff’s former head office along Fred. Roeskestraat and improving its sustainable credentials. An imposing new atrium was built between two existing building wings, for which De Kok Staalbouw B.V. supplied and assembled the complete steel structure. In addition, The Dutch Steel Company (based in the Dutch village of Heerle) was responsible for producing and
assembling the support structure for the new, glass atrium canopy as well as the steel cladding for the new roof structure.

EDGE Stadium is a development by EDGE, commissioned by owner Allianz. Atelier Pro is responsible for the design, while G&S Bouw is taking care of the construction work. ‘The former head office has two building wings, with a square and a heart-shaped building at the front and back,’ says Eddy Dingemans, Head of Projects at De Kok Staalbouw B.V. ‘The was a large atrium in between, which
was carefully demolished in order to retain the “cube” and the copper-coloured “heart”. G&S Bouw asked us to get involved at a very early stage and think about the steel structure for the new atrium. We jointly developed the final design into an implementation design and made further optimizations in the process, such as simplifying the assembly connections. The settlements of the existing wings are also accommodated with sliding joints and slight tolerances (clearance) in the new joints.’

De Kok Staalbouw B.V. started assembly work in April 2021. ‘To start with, we added a new floor on top of the existing building façades, which were subsequently clad by G&S Bouw,’ says Dingemans. ‘After that, we started on the atrium construction. Erecting a completely new steel structure in an urban environment, between two existing wings, wasn’t easy, especially since the buildings at the front and back weren’t being demolished. However, we fully embrace challenging projects like this. Indeed, the more complex, the better. The steel structure is completely free-standing. Only the floors are braced against the existing buildings.’

Instead of the usual hollow-core slabs, this project opted for 13,300 m 2 of prefab wooden floors with wooden beams and wooden top layers. Dingemans explains: ‘The floors feature narrow, vacant spaces lengthwise, with a wooden finish. These spaces can be used by employees and visitors to meet, have walking meetings, or simply to enjoy the unique atmosphere in the atrium. The floors around the cube and the heart, plus the floor above that, will be furnished as office space. New
stairwells, stair recesses, and doorways will ensure that the vacant spaces and office floors will soon be easily accessible from the existing building wings. ‘We also supplied and assembled all the steel for this.’

In total, De Kok Staalbouw B.V. produced and assembled some 1,500 tonnes of steel for the atrium construction. All steel is treated in an environmentally friendly way with a water-based coating. ‘We coated the atrium façade, built at the front of the building, in a RAL 9007 (aluminium grey) finish.’ On the roof structure, De Kok Staalbouw B.V. installed 560 m 2 of façade screens to shield the air treatment units. Plank profiles were chosen to give the ensemble a chic look. This cladding is coated in RAL 9007. 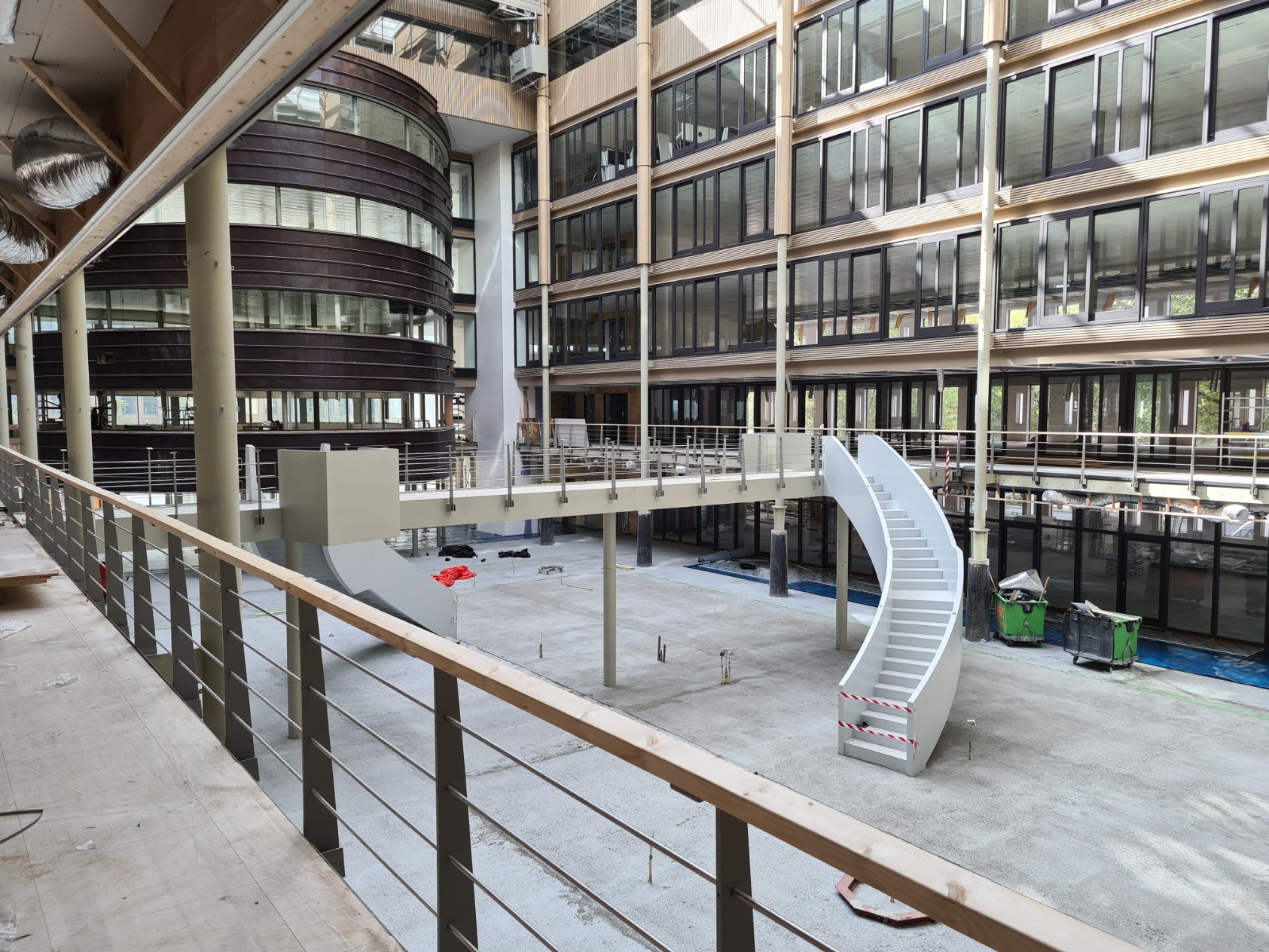 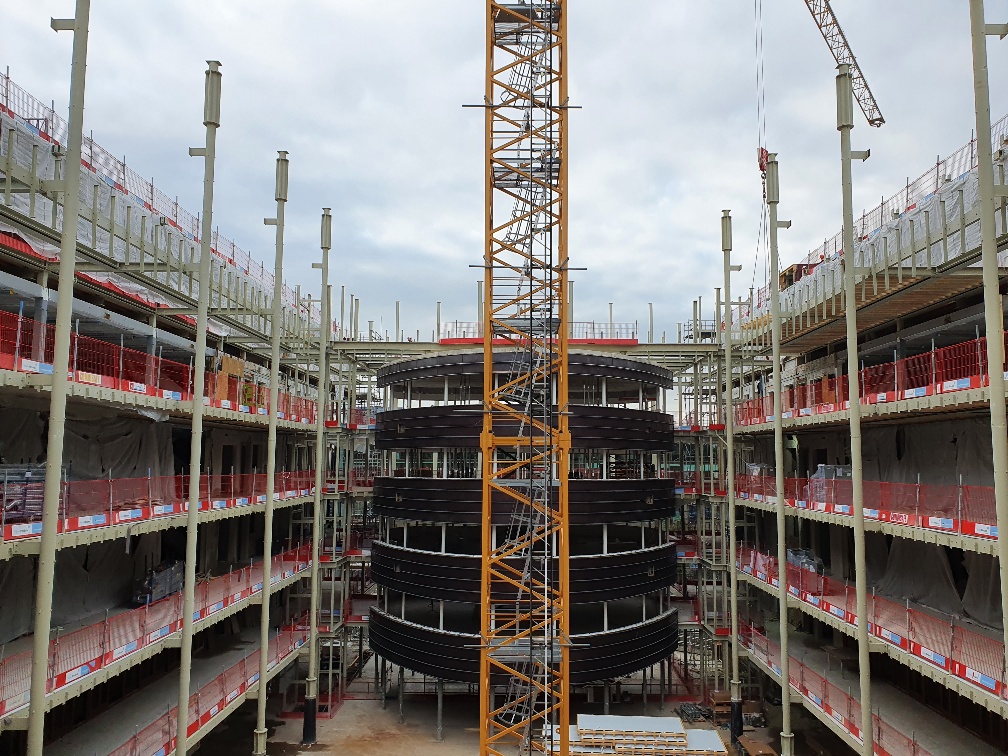 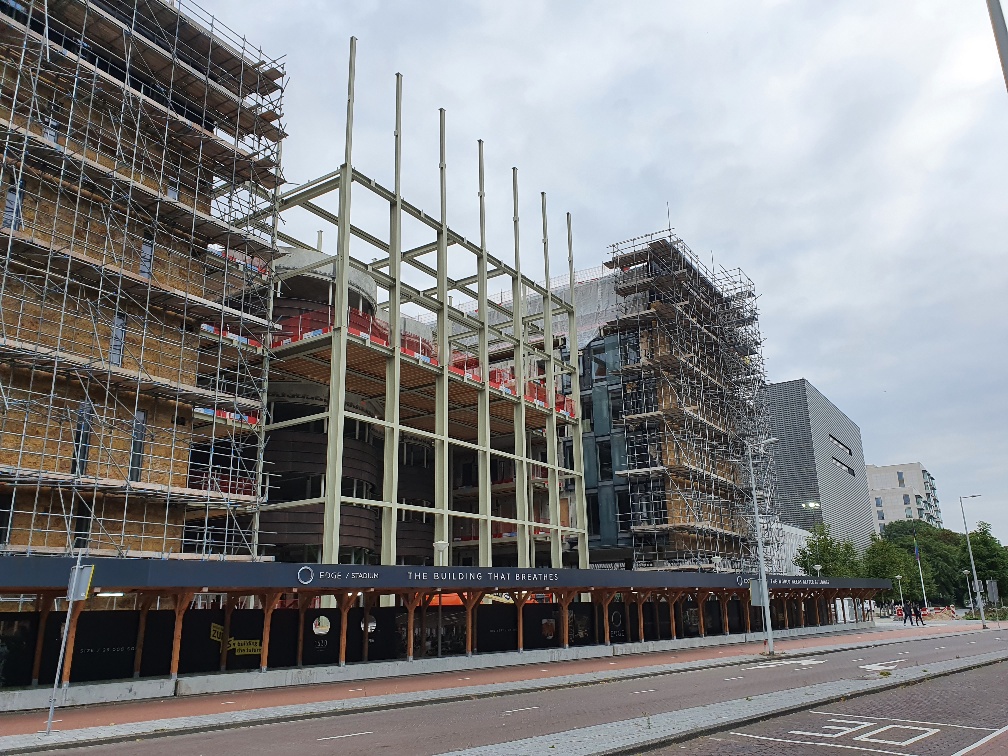 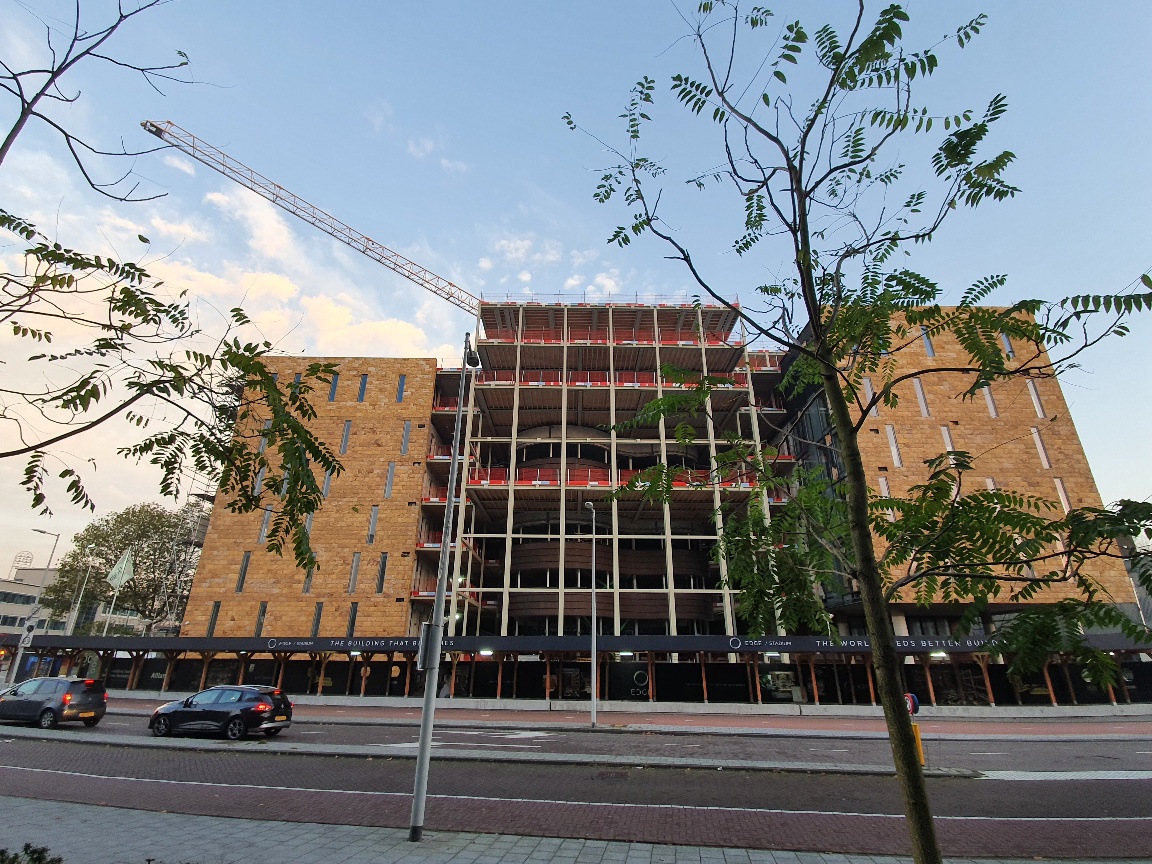 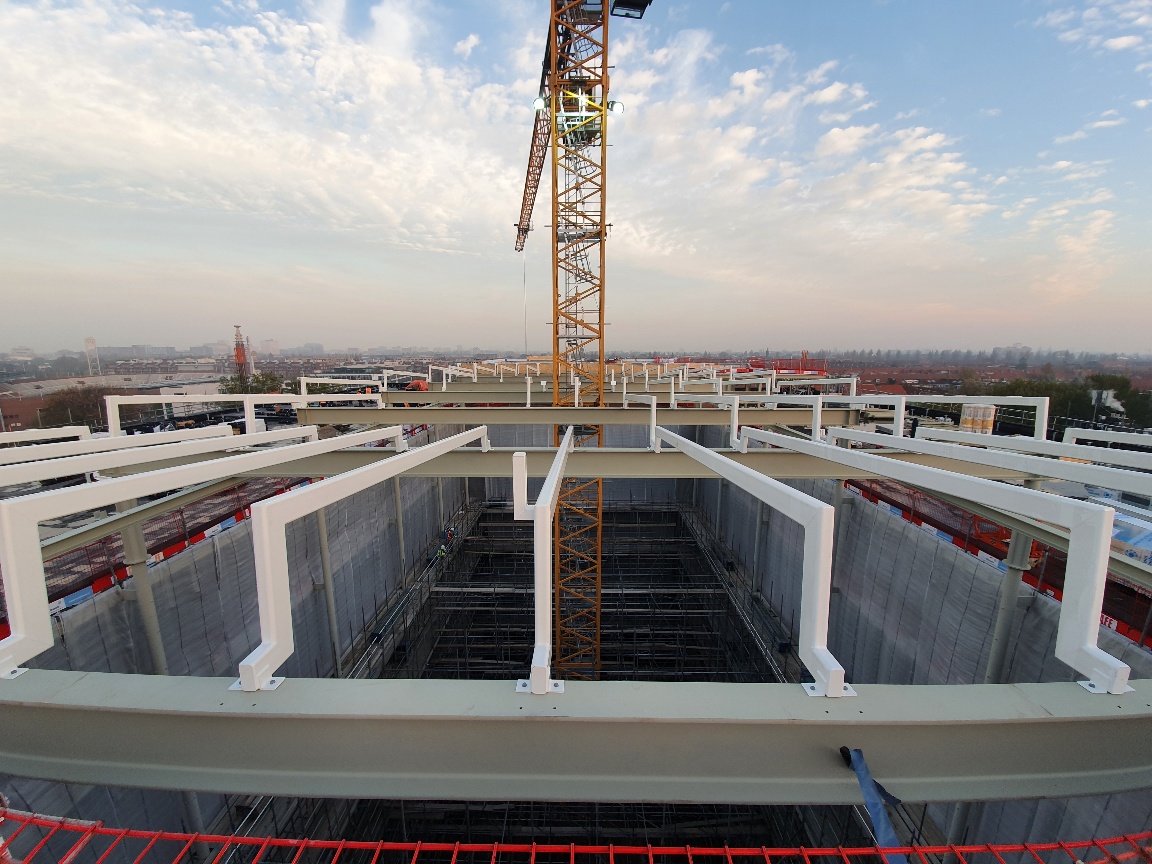 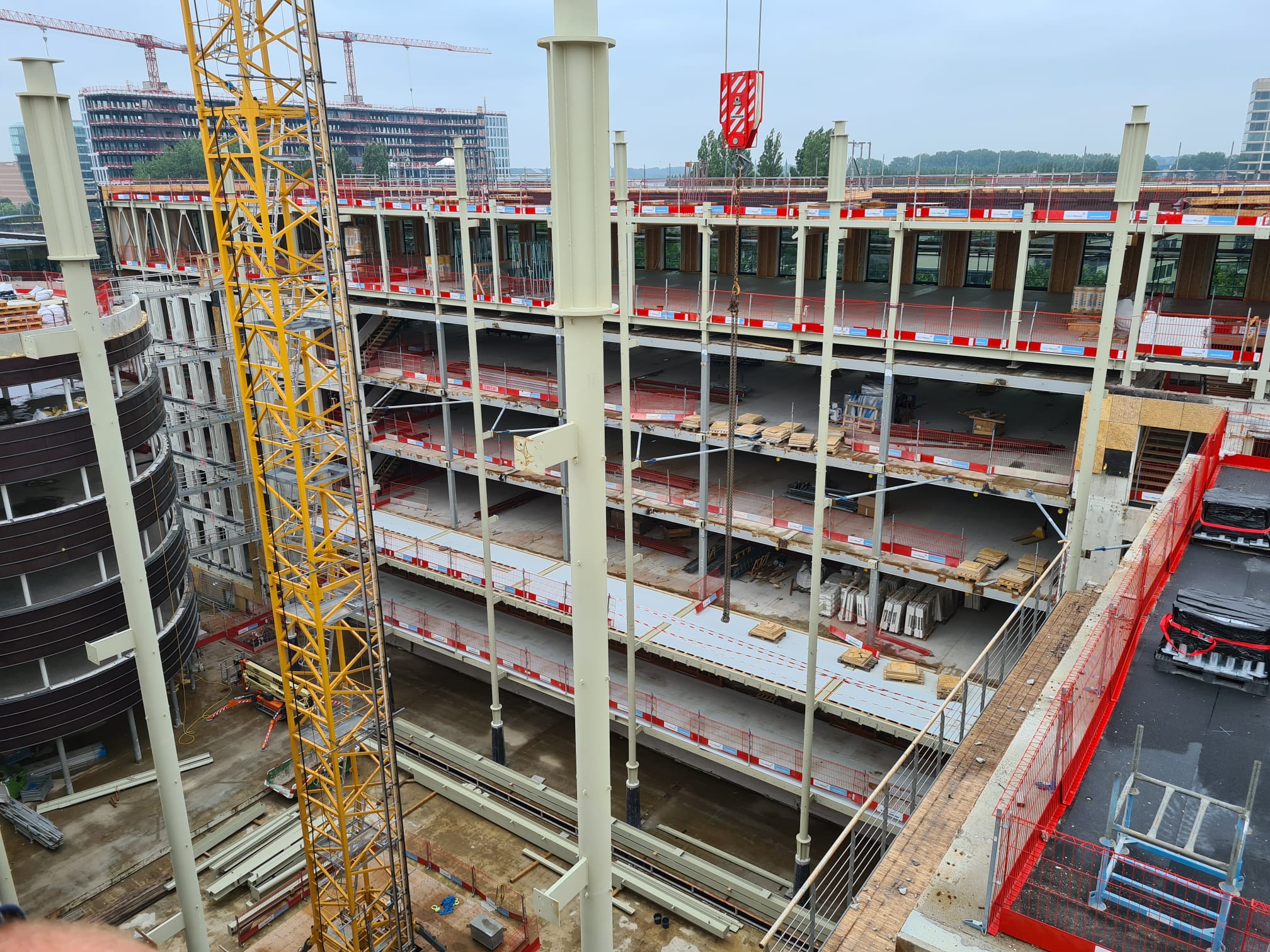 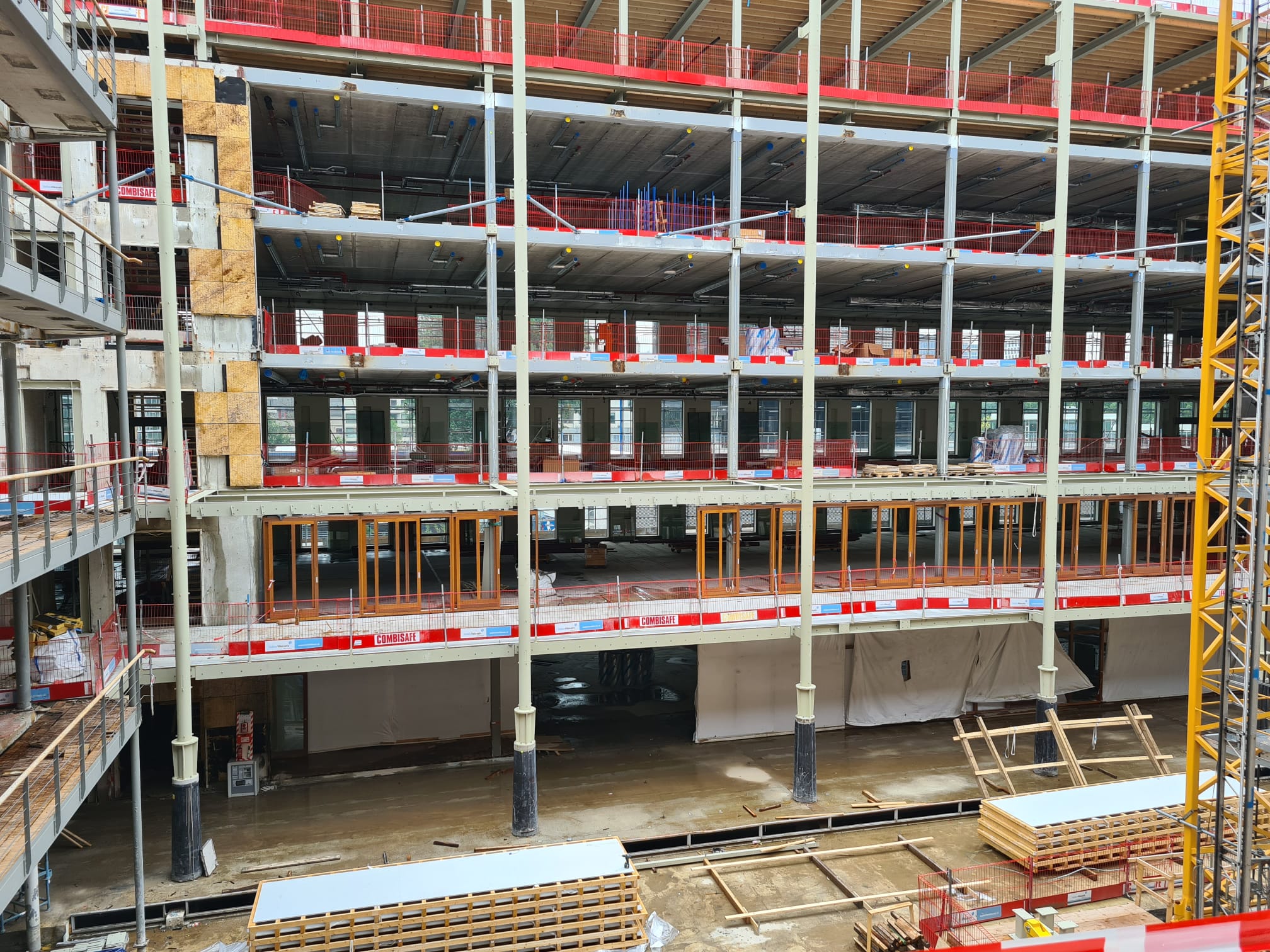 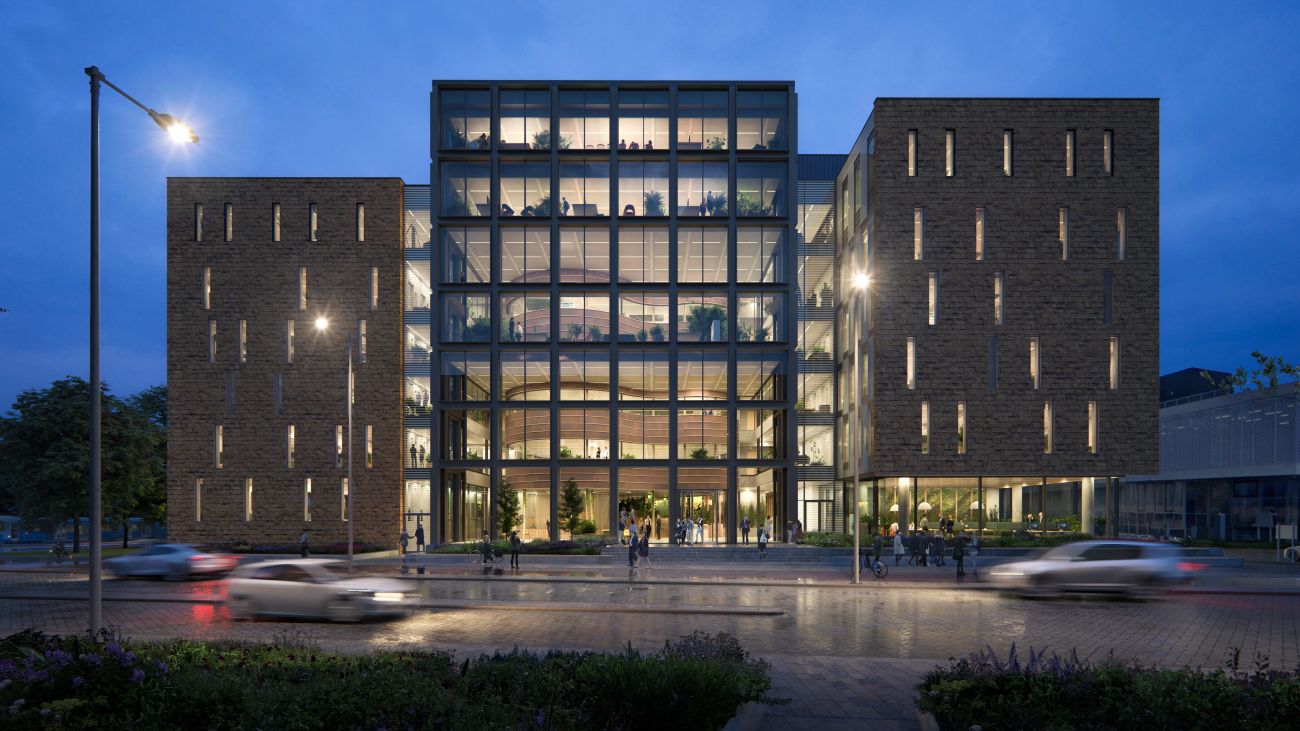